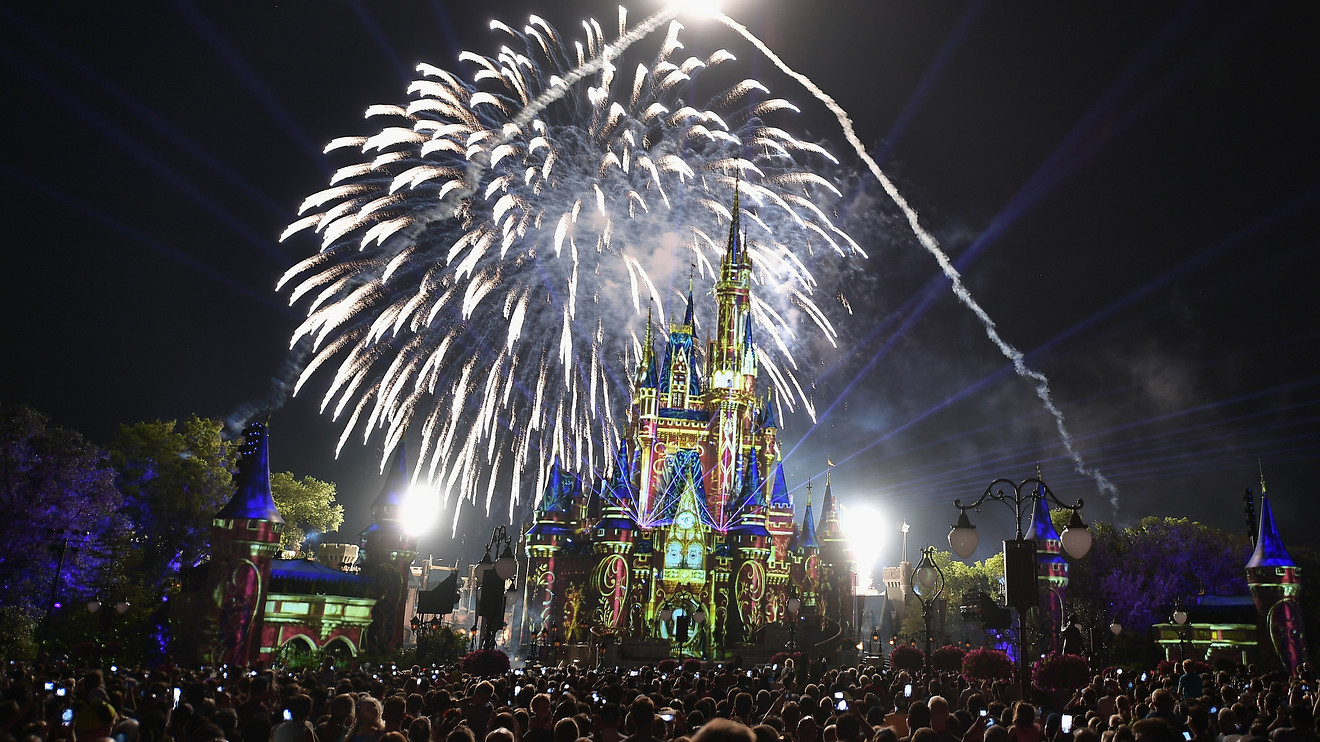 Walt Disney World and Disneyland closed over a month ago because of the coronavirus pandemic — and it’s not clear when they will reopen.

When Disney DIS, -1.56% does welcome visitors again though, those guests can expect to have their temperatures checked and see changes to some of their favorite attractions, experts said.

“ ‘We’re going to actually open up far below that just to have our training wheels on with our new procedures and processes to make sure we don’t have any lines backing up either as guests entering into the park or as they wade through the park.’ ”

However, that shutdown is ending. The first of Disney’s closed theme parks, Shanghai Disneyland, resumed welcoming visitors on May 11. “We are seeing encouraging signs of a gradual return to some semblance of normalcy in China,” Chapek said during the earnings call.

Don’t miss: Half of all Americans are canceling their summer vacations — what to expect in refunds from cruise lines, hotels and airlines

Separately, Disney posted a blog late Tuesday written by its chief medical officer, Pamela Hymel, outlining the company’s approach to reopening its parks, providing some hints as to what guests can expect when they visit Disneyland in Anaheim, Calif. or Walt Disney World in Orlando, Fla. in the future.

Here’s what Americans need to know about what their future Disney vacations could look like:

Disney won’t open every part of its resorts at once

In the U.S., the parks will likely follow Shanghai Disneyland’s model, and parts of the Walt Disney World and Disneyland resorts — such as the hotels and restaurants — will open before the theme parks, where the rides are.

As Chapek indicated on the Disney earnings call, the food and beverage area at the Shanghai park, called Disneytown, has already reopened before the actual theme park did. In her blog post, Hymel also pointed to the likelihood of a “phased reopening.”

That’s already the model in place at Walt Disney World. Disney Springs, the shopping and dining section of the Florida theme park complex, will begin a phased reopening on May 20. A small number of shops and restaurants that are owned by third-parties will open during that phase.

Employees and guests at Disney Springs will be expected to wear face coverings, and there will be limits on capacity, parking and operating hours, Disney said.

“ ‘Walt Disney World is a larger, more profitable park, but most of the guests are from outside Florida. So I suspect they’ll want to see air travel pick back up before reopening.’ ”

Disney’s crowds will probably be much smaller

There will probably be far fewer visitors in the parks when they reopen — and not just because people may be wary of mingling with crowds of strangers at a theme park in the wake of the coronavirus outbreak.

In Shanghai, the park is imposing “limits on attendance using an advanced reservation and entry system,” Chapek noted. The Chinese government has limited how many people can enter the park to 30% of its normal operating capacity, Chapek said. The park’s normal capacity is 80,000 people a day; 30% of that is 24,000. But Chapek said the park would welcome even fewer visitors to start.

“We’re going to actually open up far below that just to have our training wheels on with our new procedures and processes to make sure we don’t have any lines backing up either as guests entering into the park or as they wade through the park,” Chapek said later on the call.

Read more: Airlines are issuing billions of dollars in vouchers — but can you still get a cash refund for coronavirus-related flight cancellations?

But travel experts noted it’s not clear how a reservation system would work in the U.S. Most people who buy normal tickets to the theme parks have to set a date they will visit because Disney adjusts the prices depending on the popularity of a given day. But both Disneyland and Walt Disney World have a large base of annual passholders who are theoretically allowed visit on any given day.

Guests with booked hotel stays could have a leg up. “I’d assume Walt Disney World will give automatic park admittance to resort guests when those do reopen,” said Tom Corless, founder of travel site WDW News Today.

Shanghai Disneyland is implementing government-required health and prevention protocols, which Chapek said include “the use of masks, temperature screenings and other contact tracing and early detection systems.” The park has also taken other precautions, such as placing placards in queues for rides to encourage guests to maintain one-meter distance from one another.

Indeed, not only are guests at Shanghai Disneyland required to wear masks, but employees are, too. The one exception are so-called “face characters” — the employees dressed up like princes and princesses whose faces are exposed. So you won’t see Cinderella wearing a mask, but little kids probably won’t be able to go up and get her autograph either, because characters will practice social distancing and keep away from guests, Chapek said.

“We’ll follow guidance from the government and the medical community regarding enhanced screening procedures and prevention measures, including those related to personal protective equipment (PPE), such as face coverings,” Hymel said in her blog post.

The first wave of Disney World employees has begun returning to work to prepare the resort for its phased reopening, a union official told The Hollywood Reporter. Other precautions that guests will see include plexiglass barriers at cash registers, and visitors will now swipe their own credit cards when making purchases.

Social distancing will be the name of the game inside the parks, but that’s difficult when it comes to guests waiting in long lines to ride popular attractions.

Before coronavirus, Disney had experimented with virtual queues for some of its most popular attractions, including the new Star Wars rides. This crowd-control strategy could become more of the norm. “We’re also exploring ways to use technology to aid us in these efforts, like with our Play Disney Parks App and through virtual queues at Disneyland and Walt Disney World,” Hymel wrote.

“ FastPasses could replace normal lines for rides, depending on social distancing requirements. ”

Traditional lines where people stand in one spot for hours could also be replaced with Disney’s FastPass system, through which theme park guests reserve a time to come back and ride an attraction later in the day. The waiting areas for rides themselves might also be reconfigured so guests aren’t standing on top of one another, Munsil said.

Also see: This mother took her family on a $2,200 vacation to Disney World — for free

On popular attractions like Pirates of the Caribbean and Jungle Cruise, located at Magic Kingdom in Florida and Disneyland in California, multiple parties will typically board the same boat and ride together.

That could change under social distancing rules, Munsil predicted. “They aren’t going to want to seat unrelated people next to each other or facing directly across an aisle, and that severely limits boat capacity,” he said.

Plus, in between groups, Disney employees may be required to re-sanitize ride vehicles. And that could mean longer waits than visitors are used to, even with fewer people in the parks.

Some attractions may see even bigger changes. Rides or movies that require people to wear 3D glasses could switch to a 2D experience, because people may not be keen on wearing a pair of glasses someone else has worn even if they are sanitized, The Orlando Sentinel reported.

It remains to be seen how eager people will be to visit theme parks as the coronavirus outbreak winds down — particularly amid concerns about a possible second-wave of coronavirus infections.

If the past serves as a guide, then Disney could offer discounts or promotions to gin up attendance. That’s what the company did in the wake of the 2008 recession. “We made a conscious decision to put in place promotions that would drive attendance,” Bob Iger, who was then Disney’s CEO and is now the company’s executive chairman, said back in 2009. “This strategy has had a predictable impact on margins, but it also had the intended effect of bringing people to our parks.”

One of the promotions that Disney used back in 2009, as an example: Guests were allowed to enter the parks for free on their birthdays, with a valid photo ID, according to Disney Food Blog.

“We’ve already seen a special vacation offer for those whose trips were affected by the closures,” Disney Food Blog wrote. “Sure, this is a great way to make disgruntled guests feel better, but it’s also a pretty strong encouragement to actually rebook and spend your money at Disney parks.”

But Disney executives suggested that filling the parks may not be too much of a challenge. “Our hypothesis is, because of pent-up demand, that if we open up at something less than 50% of our standard capacity that we’re probably not going to have trouble filling it,” Chapek said.

Some observers added that the smaller crowds could end up being a selling point with people considering a Disney vacation.

“I think if they do open at first at 50% or lower capacity, I can see that as being a real draw for some folks,” Munsil said. “Some people would pay extra to be able to go to a half-full park.”

This story has been updated.